This won't be a typical trade post. My scanner is down, so I wont be able to share all the cards I have recently received in trades. Like many collectors, I have cut back on my spending recently and only bought a small amount of Topps series one, especially when comparing it to last year. If Topps releases new value boxes this year that might change. Meanwhile I have been focusing on finishing some of my set projects, specifically 87', 88' and 89' Topps and 2011 Topps Kimball Minis and Heritage. Some card shop purchases have helped, but mostly generous trades have helped me nearly complete these sets. A quick thanks goes out to:

Sam at the Daily Dimwit:
In exchange for some unused Golden Giveaway codes and Astros Sam sent me 32 Kimball minis from series one and two. Now I just need to knock out the ones from Update.

Ryan at Ryan's Pitch:
Ryan sent some 88' Topps and Oriole team set needs, the highlight being a UD Masterpiece Erik Bedard jersey card. I have never opened any UD Masterpieces, but I must say these relic cards are really nice with the dark bordered frame.

The next trade came from fellow Orioles fan, Ryan at Great Orioles Autograph Project:
He sent over some Orioles he had posted as trade bait along with Kimball minis and a few Heritage and O Pee Chee. The highlight was a Heritage chrome markakis from 2009.

Ted at Crinkly Wrappers:
Ted is probably the blogger I have traded with most. In exchange for Topps 2012 colored parallels he sent some 1988 Topps, Kimball minis and the new 2012 Topps 87' minis. The highlight of the package was a bunch of O's team needs from 2011.

Last but no least is Charles at Life Time Topps Project:
I helped fill in some holes in his life time Topps sets and in return he sent a large stack of 88' and 89 Topps. I have not catalogued my cards yet but with this trade and the others I should have all but a few cards for these two sets. The highlight of group was team set needs from 85' and 86' Topps. Charles, I will have more base and insert cards available for you when you get to 97',98' and 99' Topps.

Thanks again for the trades!
Posted by Jason C. at 6:56 PM 3 comments

Email ThisBlogThis!Share to TwitterShare to FacebookShare to Pinterest
Labels: Trades

After some deliberation I have decided not to participate in this years Golden Giveaway. Mostly because the codes don't automatically redeem a card and I wont spend enough time on the site to accumulate and trade coins. The cards that are being redeemed look really nice, but I have read posts these are being unlocked few and far between. So I am offering five unused cards I pulled, GGC 3,7,8,9 and 10. I decided cards for sets I'm building or my team collection are better than virtual coins,  if you are interested leave a comment or send me a e-mail.﻿
Posted by Jason C. at 5:14 PM 1 comments 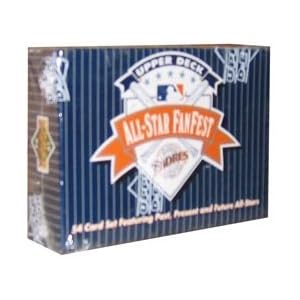 As previously mentioned in past posts, I have a hard time resisting those Fairfield 100 card jumbo packs. Besides some quality vintage cards I have found, one of the reasons, is my adoration for oddball sets and these packs and other various Fairfield repack products are full of cards from odd ball issues of the 1980's and 90's. Many times I discover sets I was unaware existed or have never seen before and is a good way to add them to my collection.

Today I picked up one while shopping and found two cards from 1992 UD fanfest. This set was produced for the 92' All Star game and Fanfest in San Deigo. My pack yielded Delino DeShields and Royce Clayton, both part of the Future Heroes subset. The 54 card set was broken up into three parts, Future Heroes (1-10), featuring rookies UD felt would make future all star games. The second subset was active All Stars (11-44), featuring all stars of the early nineties and lastly All star Heroes (45-54), featuring ten legends of the past.

The checklist of this small set is very strong, all the superstars from the nineties are represented and ten legends that include, Ted Williams and Brooks Robinson. Design wise the cards are average. They are not overly attractive, though with the full bleed photos they have the potential, but also it is not a ugly set. The design is very simple, utilizing metallic ink for the player names and logo with thick border grounding the image to the bottom of the card. Exluding the bottom border and Fan Fest logo the set has a very 97' Pinnacle Zenith feel to it. Besides the All star game these cards were also sold to collectors through the Home Shopping Club. A harder to find Gold foil set was also produced and one of these sets could be found per each sixty set case.
Posted by Jason C. at 11:02 AM 1 comments

Group Break Over At Community Gum

Community Gum is hosting a large group break, and will be busting almost a dozen Topps products from the late nineties to mid 2000's. If you are a team collector or player collector with a a lot of holes in your collection for this time period, I recommend checking it out. There are still a lot of teams left and the price is very affordable for the amount of product being opened. The last chance to claim a team is Friday, so hurry over to their site. A link is provided above.

﻿
Last nights Orioles-Red Sox game, a 4-3 win for the O's was full of drama and suspense, amplified by a long rain delay, provided a great finish with playoff like atmosphere for the final game of the season. The Orioles playing a meaningful game in September has been missing in Baltimore since 1997. Even the players were caught up in the moment as they mobbed Nolan Reimold at home plate, celebrating like they had earned the wild card berth and for a moment it felt like they had.

This season was a disappointment for the birds overall but many players such has J.J Hardy, Matt Wieters and Adam Jones had career highs in many offensive categories and hopefully can build on these performances next year. The real problem for the O's was pitching, and this concern needs to be addressed during the off season, if the O's are ever going to compete with the other teams in the A.L East.

As the Oriole players settle into their off season activities its nice to know the Red Sox are doing the same. Now we just need Justin Verlander and the Tigers to send the Yankees back home.

I haven't purchased any new Topps Chrome this year, though I have had the itch and I really like the look of the set. It is especially hard since I have a weakness for refractors. Ever since I was a kid dreaming of owning a 93' Finest Refractor, they have been my favorite parallel issue.

I have curtailed my spending on new cards recently as I focus on trades and trying to complete a few of my set building projects, especially the sets from the late eighties and early nineties that should not take long to build, unless you work very slowly like I do. A few months ago I did buy a reduced blaster of 2010 Topps Chrome at Walmart. For a marked down price I thought I would give it a shot, hoping to pull some Orioles.

I did find some Orioles base cards in my box and a Adam Jones Refractor for my collection. I also found this Wade Davis Refractor Autograph near the end of the box.

Since the Rays play in the same division as my favorite team I am familiar with Wade Davis and have seen him pitch a few times this year, in the beginning of the season he seemed to have the Orioles number, though the Orioles offense was pretty stagnant in April and May. On Sunday, Davis picked up the win against the Toronto Blue Jays, putting the Rays one game behind the Red Sox in the A.L. wild card race. I'm hoping the Orioles can play spoiler and help the Rays win the wild card this week by beating the Red Sox, so far the game is tied 2-2 in the top of the sixth.
Topps Chrome autographs look great as a Refractor and so would the Rays in the playoffs over the Red Sox. Now if someone can keep the Yankees from reaching the World Series the post season would be perfect.﻿
Posted by Jason C. at 6:14 PM 0 comments

I stumbled across a upcoming card show a few weeks ago and thought I'd post it here for collectors if you live in the southeastern Pennsylvania, Maryland or Virginia. I didn't go to the first show in April, so I'm not sure how good of a show it will be card wise. I'm planning on attending Friday to check it out. It's not far from where I work and Friday has free addmission from 5-9pm. If its worthwile, I plan on attending Sunday, admission is eight dollars and autograph signers on Sunday will be Orioles from the 1966 World Series team.

The show is located at the Hilton in Pikesville, Md, just outside Baltimore City and The Hilton is right off 695 at exit 21. Friday will feature Baltimore Raven autograph signers and Saturday is horse racing jockeys and Baltimore Colts. The autograph roster is pretty deep and for the three days and looks to be a must attend event if you are a Baltimore sports fan. Here are more details:

Click HERE for directions
If you are attending the event:

You must purchase a ticket for category of the item you want the athlete to sign. The prices listed do not include the item, you provide the item to be signed (Items are available for purchase at the event or you can bring your own). Each ticket is good for one signature on one item. You can order tickets in advance via this webpage or by calling 973-808-1740. The tickets are numbered, and called in numerical order at the event. We do not sell out unless a limit is noted.
Advanced ticket orders can be placed for this event until Thursday, September 29, 2011 @ 12pm. After that time, all tickets must be purchased at the event.

Your tickets will not be mailed to you.
You will pick them up at Will Call at the event.

If you cannot attend the event,
but still wish to obtain an autograph:
Mail Order:

Mail order fees are $5 in addition to the prices listed below (Both autographs and inscriptions). Certificates of Authenticity are $6 per signature. Return shipping is $10 for small flats and balls, and $12 for premium items.
For more information, as well as the
Mail Order Form Click here
To place a TICKET
(only if you are attending the event in person)
order online,
click the picture of the player you
wish to purchase

Please note: Times, dates, and prices are subject to change without notice. There are no refunds or credits unless a player cancels.

The Signings Hotline discount is not available for this event.